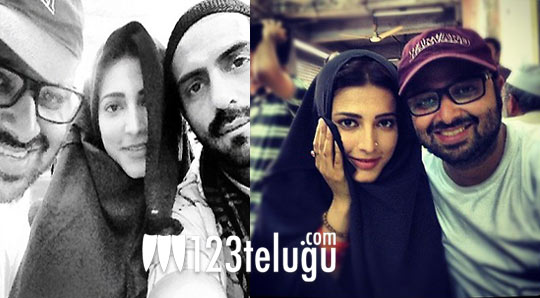 Shruti Haasan has signed her fourth Hindi film and this time she’s part of a hard hitting film titled D Day. Arjun Rampal is playing the lead role in the film and buzz is that he’s playing a RAW agent. RAW (Research and Ananlysis Wing) is India’s top most intelligence agency which is India’s equivalent of CIA. Shruti Haasan is playing the role of a muslim girl in this film and currently, the film is being shot in Ahmedabad, Gujarat. Nikhil Advani is directing the film. “The mad @nickadvani and the gorgeous @shrutihaasan on sets D Day http://instagr.am/p/RpLGInRobo/,” Arjun Rampal posted on Twitter, confirming that Shruti is part of the cast. In the past, Shruti Haasan had made her Bollywood debut in Luck and later she played a brief role in Madhur Bhandarkar’s Dil Toh Bachcha Hai Ji. After her recent Telugu and Tamil films – Gabbar Singh and 3, she bagged the lead role in Prabhu Deva’s upcoming Hindi film which is a remake of Nuvvu Vasthanante Nenu Vaddhantana. Apart from these two films, she’ll soon join the cast of Ravi Teja’s upcoming film Balupu later this month.