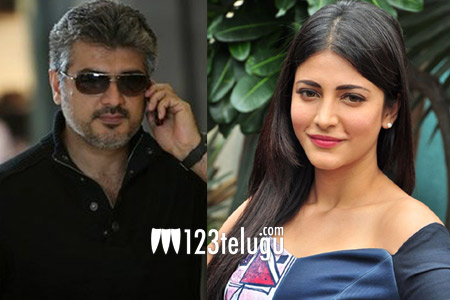 Svelte beauty Shruti Haasan is currently taking some time off and is working on setting up her production house. The actress has not signed any new film in Telugu, Tamil or Hindi. But if the ongoing reports are anything to go by, Shruti may sign a biggie soon.

Apparently, Shruti Haasan is the frontrunner to play the female lead in Thala Ajith’s 58th project, which will take off after Vivegam’s release. This film is rumored to be directed by Siva, who is also helming Vivegam.

In the past, Shruti had romanced Ajith in Siva’s super hit action drama, Vedalam. We will have to wait until these speculations end up becoming true.