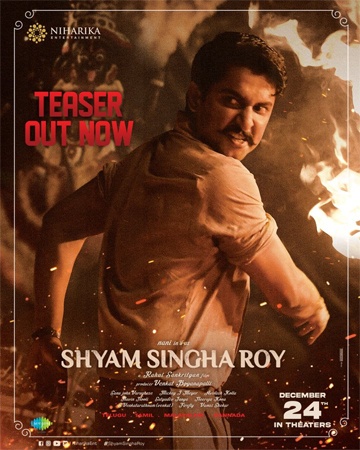 Shyam Singha Roy is Nani’s costliest film to date and the makers have released the teaser today. The only word that comes to our mind after watching the teaser is Magnanimous.

The period film is set in Kolkata and looks huge with dramatic visuals. The scale, camerawork, BGM are top notch to say the least.

Nani is shown as the man fighting for his rights in Kolkata and he looks amazing and also mouths a mass Bengali dialogue which is superb.

Sai Pallavi looks ethereal in her Bengali get up and the action part and production design are amazing to say the least. The last bit where Nani and Kriti Shetty are showcased in present time also looks novel.

Directed by Rahul Sankrityan, this film has music by Mickey J Meyer and he elevates every scene with his rocking BGM. The teaser has surely taken the hype to another level altogether. SSR releases on Dec 24th this year.