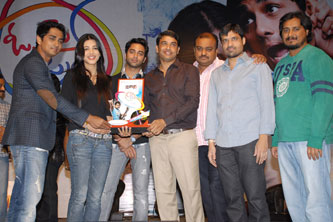 For the students of Sri Chaitanya College it was a Saturday that they will never forget in a hurry. Their college played host to Oh My Friend team of Siddarth, Shruthi and Producer Dil Raju. An energetic Siddarth was seen mingling with the crowd of youngsters while Shruthi smiled from the safety of the dais. A beaming Dil Raju said that Oh My Friend will be watched a minimum of three times. “Once the boys will watch the movie, and then they will take the girls along and finally the parents too will join” he said amidst cheers.

But the star of the evening was hero Siddarth who even gave in to an impromptu request for a song rendition. When he took the mike he was energetically cheered on by a visibly excited bunch of youngsters who even joined him for a jig. Siddarth is hoping that this movie will end his dry run at the box office.