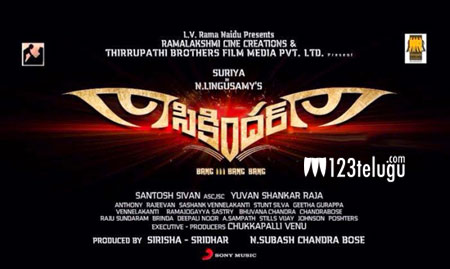 Prime Media has acquired the overseas distribution rights of the most anticipated stylish action flick “Sikander” directed by Lingusamy and produced by Sridhar Lagadapati The film stars Suriya in a dual role and Samantha as the female lead while Bollywood actors Manoj Bajpai, Vidyut Jamwal, Rajpal Yadav and Dalip Tahil play supporting roles.

Cinematography is handled by India’s ace cameraman Padmashri Santosh Sivan, while Yuvan Shankar Raja has composed the music, editing by Anthony and art department by Rajeevan. Anjaan is slated for releasing on Independence Day weekend August 15, 2014 as a summer biggie.

The teaser of the movie was released. Sikander surely promises to be one of the best action entertainers of all times.

For Trade Inquiries or to screen “Sikander” in any city in USA, contact Balarami Reddy @ 678-358-3114 or email anjaanmovieusa@gmail.com