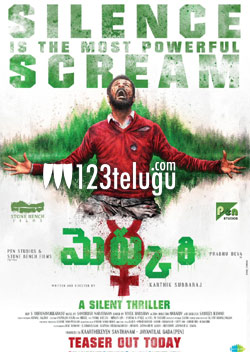 After 30 years of Pushpaka Vimanam, yet another silent film is coming to us in the form of Mercury. The film is directed by the super talented Karthik Subbaraj who has made films like Pizza and Iraivi in the past.

The film’s trailer was released recently and within no time it has clocked two million digital views. Touted to be a crime thriller, this film has Prabhu Deva in a negative role for the very first time in his career.

He is showcased in a very interesting manner in the trailer and his role is said to be the backbone of the film. As it is a silent film, it is releasing in several parts of the country on the 13th of this month.

The film is releasing a day after Nani’s Krishnarjuna Yuddham and we need to see how it performs at the box office.