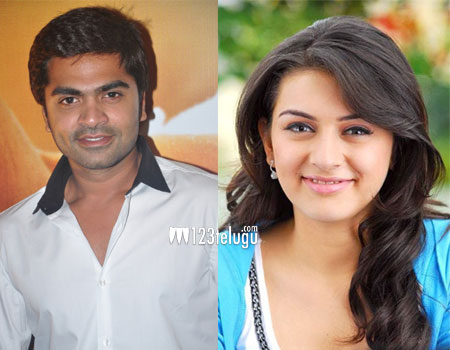 Tamil actor Simbu and Hansika have officially revealed that they are in love with each other. Over the past few months, there have been several rumours about the two actors and several newspapers have been reporting that they might get married soon. Now, vexed up with all the unwarranted attention on their love life, both Hansika and Simbu have openly stated that they are indeed in love with each other and requested everyone to not spread any more rumours.

“Been hearing to many rumours abt my personal life, so jus wana clear.yes!I’m seeing Str:)n hence I wouldnt like 2talk abt my personal life ,” Hansika posted on Twitter. On the other hand, Simbu, who has become a popular choice to croon hit numbers in select few Telugu films, confessed that the decision on their marriage will be taken by their respective families. “Yes I’m am with hansika and right now she is doing really good and marriage will b decided by our family … Hope u will respect our privacy,” he said. Since both of them are quite busy with their respective projects, it’s not yet clear when they might get married. Currently, Hansika is part of Manchu family’s multi-starrer film and she has few other Tamil films in hand.