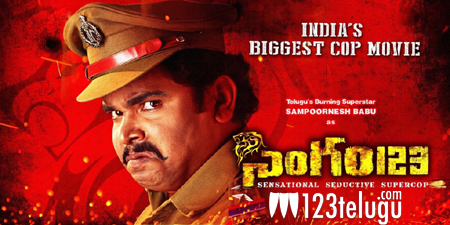 Burning star Sampoonesh Babu, who hogged the limelight with Hrudaya Kaleyam, is slowly carving a path for himself on the silver screen with his satirical roles.

Currently, he is gearing up with a cop drama titled Singham 123. The trailer of this film which was released recently has attracted the audience big time. Sampoo’s trademark dialogues and mannerisms have made this trailer hilarious.

Singham 123 is a spoof action comedy which is being directed by debutante Aksat Ajay Sharma. Manchu Vishnu’s 24 Frames Factory is producing this flick which is gearing up for a release soon