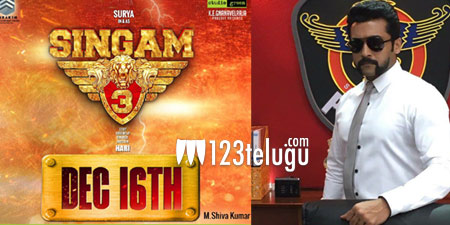 We have already reported that Suriya’s much-anticipated movie, Singam3 completed its shooting recently. The unit has announced that the teaser will be released on November7th.

Inside Sources reveal that Suriya has completed dubbing for the teaser which is filled with powerpack dialogues and some outstanding performance which will surely impress his fans big time.

Being directed by Hari, this movie is produced by K.E. Gnanavel Raja under his Studio Green banner. Anushka and Shruti Hasan play female leads and Devi Sri Prasad composes music.