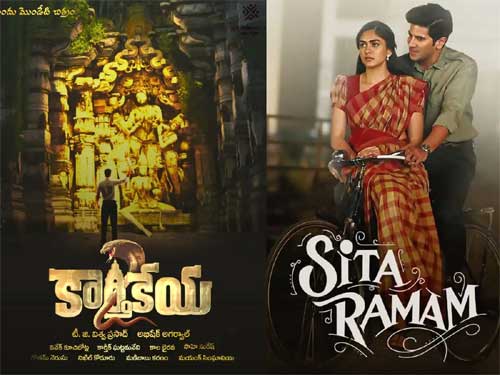 Sita Ramam starring Dulquer Salmaan and Mrunal Thakur, became the talk of the town during its release. Its poignant storytelling and fantastic performance from the lead cast attracted one and all. All these factors made this Hanu Raghavapudi’s film a PAN Indian blockbuster.

On the other hand, young actor Nikhil Siddharth impressed the audience nicely with his latest outing Karthikeya 2. This adventure thriller directed by Chandoo Mondeti had a superb run in North Indian markets and became the highest-grosser for Nikhil. Anupama was the leading lady.

A few days back, both films were telecasted on television simultaneously. The report is that Sita Ramam fetched a TRP of 8.73 (Star Maa) while Karthikeya 2 got 7.88 (Zee Telugu). Both these TRPs are good, considering the wave of OTT, and Sita Ramam had the edge over the Nikhil starrer.