Sita trailer: An interesting retelling of the epic Ramayan
Published on May 10, 2019 10:04 am IST 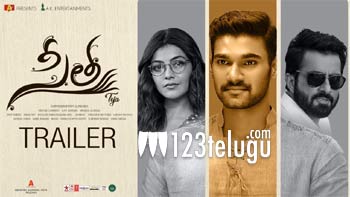 The theatrical trailer for young hero Bellamkonda Sai and star heroine Kajal Aggarwal’s upcoming film, Sita, has been unveiled this morning. After watching the trailer, one gets a feeling that director Teja has retold the epic Ramayan with an interesting twist to its main characters, Sita, Rama and Raavan.

In Sita, Kajal plays Sita, a selfish and a headstrong girl. For Sita, her money is more important than emotions. On the other hand, Sai plays Sita’s protector. His meek and gullible characterization will be interesting to watch. Finally, Bollywood star Sonu Sood plays the film’s baddie, but he tells people not to call him a Raavan. On the whole, Sita’s trailer certainly raises curiosity.

Sita is produced by Anil Sunkara and Abhishek Agarwal. The movie will be hitting theaters on May 24. Anup Rubens has scored the soundtrack. Bollywood starlet Mannara Chopra will be seen in a key role.