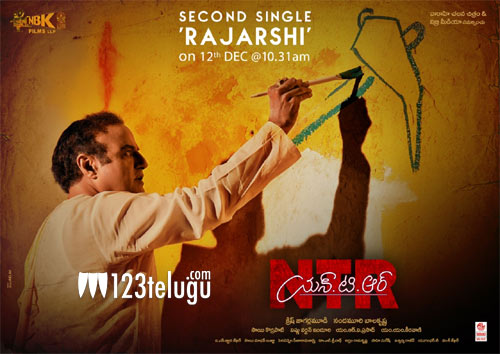 After the first single ‘Kathaa Nayakaa’, the makers of NTR biopic ‘NTR Kathanayakudu’ had announced earlier today that the film’s second single ‘Rajarshi’ will be released this evening. Veteran music composer MM Keeravani has scored the film’s soundtrack.

However, here’s a small change. NTR Kathanayakudu’s team revealed that ‘Rajarshi’ song will not be released today but it will be out on the 12th of December at 10:31 am.

Krish is directing this much-awaited biopic and apart from playing his father’s role, Balakrishna is also co-producing the movie along with Sai Korrapati and Vishnu Induri. NTR Kathanayakudu is slated to hit screens on January 9.