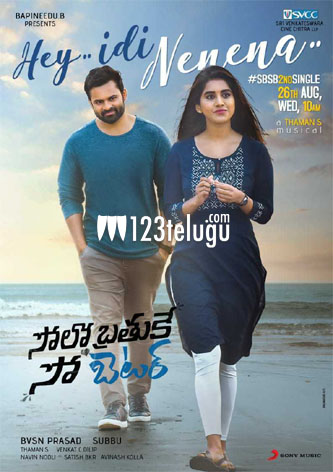 Yesterday, hero Sai Dharam Tej took to Twitter and teased his fans by saying that a big event in his ‘single’ life will be unraveled this morning at 10 am. While some thought that Sai is hinting at his wedding announcement, many thought that he’s only going to give an update regarding his upcoming film, Solo Brathuke So Better.

The surprise is out now and it’s indeed an announcement regarding SBSB. The film’s second single ‘Hey Idi Nenena’ will be out on August 26 at 10 am. The song has been composed by Thaman, who set the expectations high with the ‘No Pelli’ song. Sai also shared a cool poster featuring him and the film’s leading lady Nabha Natesh.

Debutant Subbu is directing SBSB and veteran producer BVSN Prasad is bankrolling it. The film will hit screens as soon as theaters reopen.