Some similarities between Allu Arjun and Nani’s upcoming movies
Published on May 24, 2020 7:13 pm IST 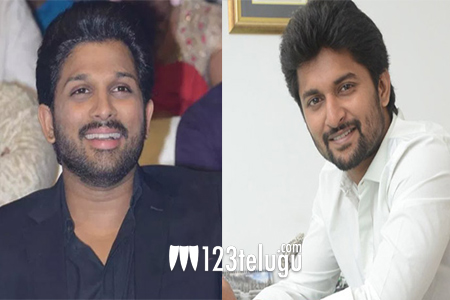 It’s well known that hero Allu Arjun has been mastering the Chittoor dialect to bring in the authenticity factor to his role in the highly-anticipated action drama, Pushpa. The film is set in a rural milieu against the backdrop of the Seshachalam red Sanders smuggling. The Stylish Star will be seen in a rugged avatar in his lorry driver’s role.

On the other than, hero Nani recently signed a rural action drama under debutant Srikanth Odela’s direction. Like Bunny, even the Natural Star will be portraying a rugged role in this rustic village drama. While Pushpa has a Chittoor backdrop, Nani’s new film will have a Telangana backdrop and the actor will be speaking authentic Telangana dialect in this as-yet-untitled film.

Yet another interesting coincidence is that, while Pushpa is being directed by star director Sukumar, Nani’s film’s director Srikanth Odela is a former assistant director in Sukumar’s team.