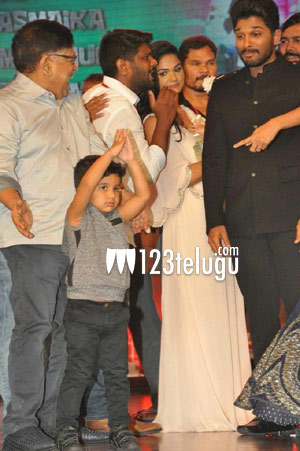 Allu Ayaan, son of Allu Arjun, was the cynosure of all eyes at the audio launch of Duvvada Jagannadham last night in Hyderabad. Allu Arjun was companied by his entire family and Allu Ayaan, along with Dil Raju’s grandson, launched the album.

Interestingly, what caught everyone’s attention towards the end of the event was Allu Ayaan saluting the crowd when all the guests were on stage. Allu Arjun, who stood by his son, was stunned by the young boy’s gesture.

The film, directed by Harish Shankar, is gearing up for release on June 23.

I have to admit this gesture of Ayaan Surprised me 😂😘 pic.twitter.com/7SyE2rqSo2