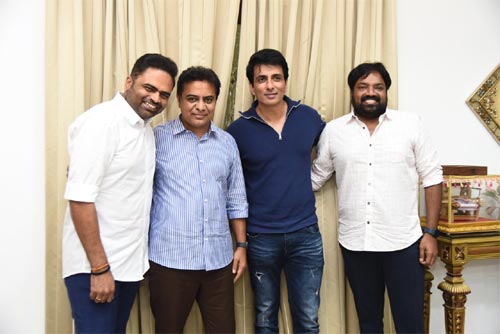 Sonu Sood is the current favorite of the country. The manner in which he has helped so many during this pandemic is there for us all to see. Sonu has helped so many in the Telugu states and has also won a lot of praise from the likes of KTR.

So, Sonu took some time off and met KTR at Pragathi Bhavan. Both KTR and Sonu spoke at length about how Telangana tackled the Covid situation and how TRS helped during this time.

KTR also congratulated Sonu for his heroic deeds in helping the poor. Sonu was also accompanied by directors Vamsi Paidipally and Meher Ramesh. The snaps have gone viral. Also, the news is that Sonu and KTR discussed various aspects of how the Telangana government can help the common man by taking ideas from people like Sonu Soon.