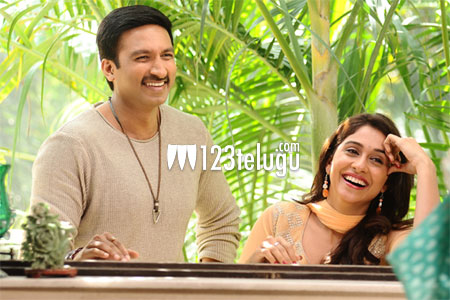 Gopichand, who is fresh off of his successful last movie Jil, is almost ready for his next action entertainer Soukyam. Regina Cassendra is the actress and the movie is apparently ready for a December 25th Christmas release.

According to sources, the shoot is over except for a couple of songs pending and for this the unit has headed to Europe to finish the shooting. Audio release is also to happen soon. AS Ravi Kumar Chowdary, whose last flick Pilla Nuvvu Leni Jeevitam was a hit, is the director.

AS Ravi Kumar Chowdary and Gopichand’s previous collaboration in the form of Yagnam was a hit and we perceive that this will have the same outcome. We will have to wait for further official announcment.