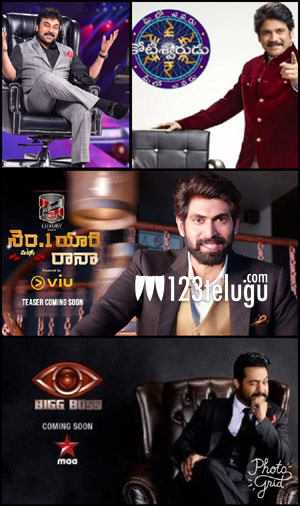 It all started with Amitabh Bachchan hosting the first original Kaun Banega Crorepati. Later many star heroes from Bollywood embraced the small screen and glammed it up.

In Telugu the same continued. It started with Nagarjuna hosting the first ever Telugu KBC named Meelo Evaru Koteeswarudu. After its stupendous success Chiranjeevi followed it up with another season of MEK.

What is more surprising is that the young talent like NTR and Rana have started their own shows now. Tarak will be hosting the blockbuster reality show Big Boss in Telugu which was hosted by Salman Khan in Hindi and whose promising title is already released. Rana also has a show named No.1 Yaari coming soon.

Earlier the actors started off their careers in TV and then made it to the big screen like Shahrukh Khan, Madhavan, Vidya Balan etc. Now the trend seems to be the other way. It all makes sense now because almost every house has a TV and a cable.

This is a good news for the TV viewers but how this is going to impact the market value of these stars should be seen. What would be more interesting is if the star actresses too start their own shows. The first names that come to the mind are Samantha and Anushka. It would be treat to watch all these stars on small screen for the star struck TV audience.