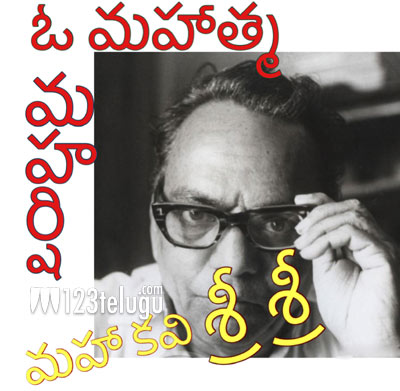 On the occasion of Keshava teaser release, I am not sure how many viewers were reminded of the great personality Sri Sri but I for one, was immediately going through the songs and poems of him especially the Mahaprasthanam and the movie Aakali Rajyam that introduced him to the literature illiterates like myself. Some of his poems evoke very strong revolutionary emotions, the ones that inspired an entire generation and are no lesser sharp even for this generation.

It would be a surprise to many that Sri Sri’s earlier songs were more mostly duets. Aakasa veedhilo andala jaabili from Mangalya Balam was one of his earlier works. It was a beautiful lyric explaining the romance between the moon and a beautiful star. He effectively uses the moon and the star to let the hero and heroine convey their hearts.

Telugu cinema had witnessed the hints of his mighty mind’s power for the first time in the iconic song “Jayammu nischaymbura”. The song became so legendary that the first two words became a permanent phrase in Telugu vocabulary. The lyrics of the song comprise of some inspirational lines for students and for the ones in the difficult times like the hero in the movie. Again in Velugu Needalu, Sri Sri’s socialistic ideals can be clearly evident in the song “Oh Rangayyo”.

He changed gears every now and then with songs like “Padavela Radhika” from Iddaru mithrulu. The composition and the lyrics here showcase the true beauty of our language. That beauty is the main reason this song got stuck in mind for all these years. Any language enthusiasts should definitely give it a try. Here is a sample of that beauty just to give you a taste -Venugaana loludu nee veenamrudu ravamuvini, priyamaaraga ninu cheraga dayachesedi subhavela, paada vela raadhika pranaya sudha geethika. Just listen to that song now to fall in love with our language again. Same is the case with “Naa hrudayam lo nidhurinche cheli” from Aaradhana. This song takes it to the next level with its mellifluous usage of the words. The song flows like a beautiful wave of Telugu sounds as if there was no need for music in the song. It is so unfair that Sri Sri today is remembered for only his motivational writings. He was indeed a good romantic at heart too.

Before we had “Srirasthu subhamasthu” from Pelli Pustakam and “Alanaati” from Murari, there was one classic few generations opted for whenever there was a need for a marriage song. It was “Kallalo pelli pandiri” from Aatmeeyulu.

Then there is one more iconic legendary song “Telugu veera levara” from Alluri Seetaramaraju. This song needs no introduction. This got Telugu language a national recognition in the form of best lyric National award, a very rare respect for Telugu song even today.

After that song Sri Sri stayed mostly with revolutionary and motivational songs. Then came Aakali Rajyam, a movie that immortalized Sri Sri through the intelligent usage of his writings by K. Balachander and very brilliant and effective delivery of Kamal Haasan. Let me just end this article by saying three phrases “Maro Prapancham”, “Jagannatha ratha chakral” and “Ye desa charitra”. This smart phone generation might not have time for the whole Mahaprasthanam but lookup these three phrases and listen to these three poems and remember the man that always burned with a strong desire to motivate youngsters for a better and brighter tomorrow. His each word is infused with a sense of chasing you towards your own goals. A great man he was and will always be. Thank you Keshava team for reminding us of him and introducing him to the current generation. The lines used in Keshava teaser are apt to describe Sri Sri and his works.