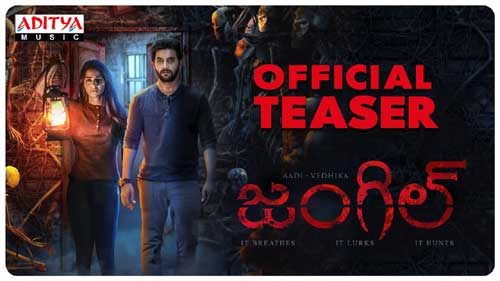 The teaser for Tollywood hero Aadi Pudipeddy’s maiden Tamil-Telugu bilingual horror thriller, Jungle, dropped yesterday. The film also features Tamil actress Vedhika in a lead role. The teaser has some spooky and chilling moments and it raises expectations on the film.

Jungle’s teaser has some solid visuals by cinematographer Goutham George and Jose Franklin’s background score enhances the fear factor. Overall, the teaser has been cut perfectly and Aadi seems to be coming up with a promising outing after a long time. Directed by the duo Karthik & Vignesh, Jungle is being produced by Mahesh Govindaraj under Auraa Cinemas banner.