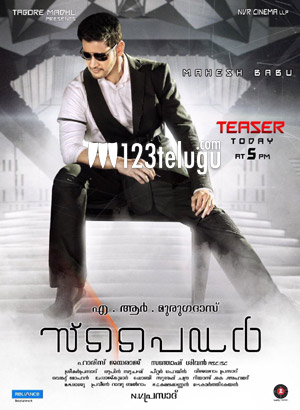 The Telugu and Tamil teasers of Superstar Mahesh Babu and AR Murugadoss’ highly-anticipated spy thriller, Spyder, were unveiled on August 9th on the occasion of Mahesh’s birthday. As per the latest updates, Spyder’s Malayalam version’s teaser will be unveiled this evening at 5 pm.
​
Spyder’s Telugu and Tamil teasers had the same footage. It will be interesting to see if the makers have got any surprises in store with the Malayalam teaser. Spyder’s Malayalam version will also be releasing big on September 27th, along with the Tamil, Telugu and the Arabic versions.