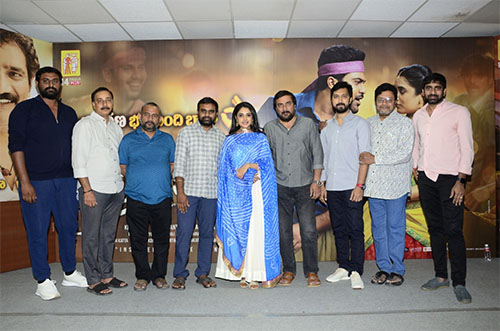 To celebrate the success and thank the audience, Sreekaram’s team interacted with the media this evening. The special attraction at the meet was the presence of three popular directors – Gopichand Malineni, Bobby and Ajay Bhupathi, who revealed how they got connected to Sreekaram emotionally.

Speaking at the meet, Gopichand Malineni said that whenever he visited his village for Sankranthi festival, he noticed several senior citizens waiting for their children to visit them. “90 percent of us hail from villages. So most of us will connect to Sreekaram emotionally,” Gopichand said. He also heaped praises on the debut director Kishor and producers Ram and Gopi Achanta’s passion in bringing out such a genuine movie.

“Sreekaram is a very honest film,” director Bobby said. “I must thank the audience for encouraging the film by spreading a positive word of mouth. One of my friends watched the movie and had tears in his eyes. I appreciate the makers’ passion in backing such an honest film. Sharwa’s subtle performance was one of the main highlights,” Bobby said.

Sharwa’s Maha Samudram director Ajay Bhupathi said, “I come from a village and I could connect to the film instantly. Director Kishor first made Sreekaram as a short film in 2016. He must be appreciated for choosing such a genuine story on his debut. Sreekaram is a must watch movie for youngsters.”