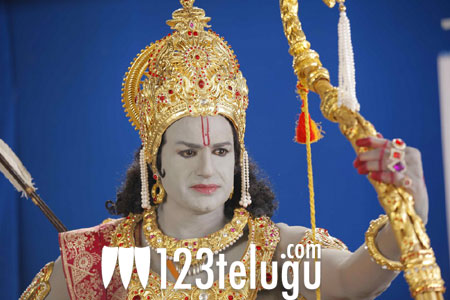 The most eagerly awaited devotional offering of Nandamuri Balakrishna is Bapu’s magnum opus ,Sri Rama Rajyam. The movie is all set to release across the world on November 17th in a grand way. The movie’s posters and pictures have created quite a buzz in the public and there has been a terrific response to Balayya’s Lord Rama look. Many elderly people who have watched the pictures are of the opinion that the Legendary NTR’s look is clearly apparent in Balayya’s getup.

The movie has been made on very high technical values and top technicians have worked on the CGI and special effects part. Ilayaraja’s music has become an instant chart buster and there has been a tremendous response to the audio album.

Nayanatara is going to be seen as Sita. Akkineni Nageswara Rao garu will be seen as Valmiki. Srikanth is portraying the role of Lakshmana. Sri Rama Rajyam has been directed by legendary director Bapu. The movie is set in the Lava Kusha episode of the Ramayana.