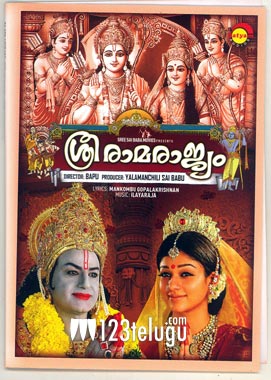 Bapu’s devotional flick ‘Sri Rama Rajyam’ was widely hailed as one of the best Telugu movies to have been made in recent times.The movie has been released in Tamil sometime ago and on July 27th, the Malayalam version was released as well. Producer Sai Babu has said that a good response has come from Malayalam movie lovers.

Fine performances from Nandamuri Balakrishna and Nayanatara, Bapu’s visual magic and the strong script penned by his long time associate Mullapudi Venkata Ramana are said to be the major reasons for the positive reception.