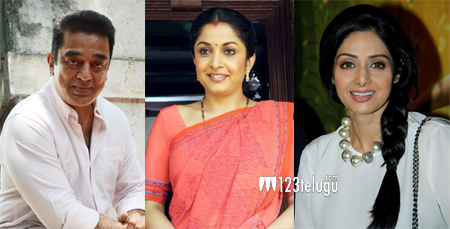 Well ! You cant keep out the latest family entertainer Drushyam out of the news, do you. The much talked about film, is all set to start rolling in Tamil and Kamal Haasan is playing the lead role. But the million dollar question, is as to who will do the all important role which Nadia did in Telugu.

Several names have been making the rounds, and according to the latest Kollywood reports, Sridevi has been offered the role. Whether Sridevi has accepted the role, yet an official conformation has not yet been received from the makers. Reports also reveal that Ramya Krishna is also being considered, if Sridevi backs out at the last minute.

It would be rather interesting to see who ends up doing the role which had huge importance in the film. Drushyam is the remake of the super hit Malayalam film with the same name.