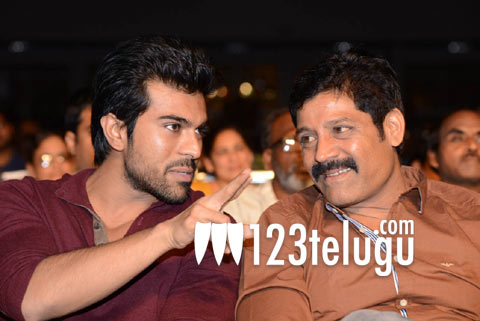 Srihari has carved a niche for himself by doing several strong supporting roles in recent few years. One such performance which brought him more laurels was that of Sher Khan in Magadheera. His scenes with Ram Charan were highly appreciated and since then the two actors have been on very good terms. At the audio launch of Ko Antey Koti, Ram Charan and Srihari met once again on stage and this is where Ram Charan revealed that he’s all set to team up with Srihari once again. Apparently, Srihari is going to play an important role in his upcoming film Zanjeer. More details about Srihari’s role in the film’s Telugu version will be revealed soon. Ram Charan, Priyanka Chopra are playing the lead roles in this remake and Sonu Sood, Mahi Gill and Prakash Raj are playing other important roles. The film was recently shot in Hyderabad and the next schedule is likely to take place later this month. Apoorva Lakhia is directing the film and Amit Mehra is producing it. Devi Sri Prasad is composing the music. The film is all set to hit the screens in summer, 2013.