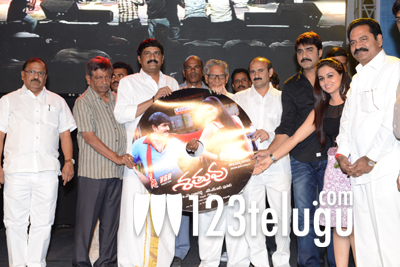 Srikanth and Aksha are going to be seen in the lead roles in the upcoming movie ‘Sathruvu’. The film is being directed by S.S.R Prasad and V.N. Rami Reddy is the producer. The audio album of the movie was released at an event in Hyderabad on Monday night, with minister Ganta Srinivasa Rao being the chief guest while Mysoora Reddy received the first CD.

Srikanth said “In the past, Venkatesh’s movie titled ‘Sathruvu’ did very well at the box office. We believe that this title is very appropriate for our movie given the nature of the story. Except for one scene, filming for the movie has been completed. Aksha’s role in the movie is better than mine”. Music has been composed by Gana.

Producer Rami Reddy expressed his happiness over the movie’s output. “Gana has provided excellent tunes for this movie. The director managed to complete the movie on time even though there were a lot of obstacles. He did an excellent job of adjusting the direction to the story”. The movie is aiming for an early 2013 release.