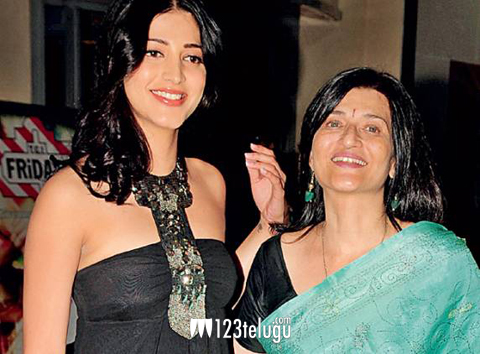 Sruthi Haasan is currently busy with multiple projects in Bollywood and Tollywood. Almost every movie of Sruthi, which was released this year, had received good response and few of them went on to become super hits.

She has apparently been busy with all the shootings and promotional activities of her films which is worrying her mother Sarika. In between the gap of film shoots and promotions, she is also taking part in Ad shoots for the brands she is endorsing. Sarika is concerned that Sruthi is working too hard and could be burning herself out with too many commitments. Sarika advised Sruthi to take a break from shoots to rejuvenate herself.

Meanwhile, Sruthi has celebrated her sister Akshara Haasan’s birthday yesterday. She is right now eagerly waiting for her next Tollywood release ‘Yevadu’ opposite Ram Charan.