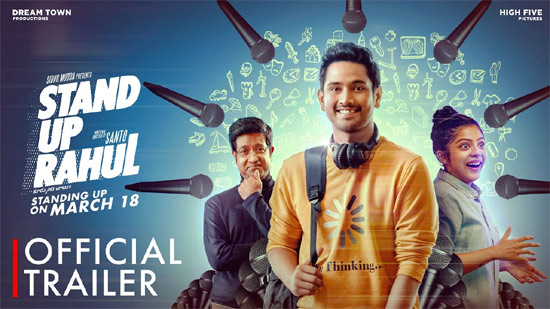 Young and promising hero Raj Tarun will be seen as a stand-up comic in his next, Stand Up Rahul. Directed by debutant Santo Mohan Veeranki, the film is billed to be a coming-of-age feel-good romantic comedy.

Today, the makers have unveiled the film’s theatrical trailer. The trailer showcases what the film is all about- its storyline and the conflicting point. Raj Tarun plays the wannabe Stand Up comic. He doesn’t get much support from his mom played by Indraja, who is very practical in life. She doesn’t want her son to end up as a failure like her husband, played by Murali Sharma.

Raj Tarun who already lost three jobs due to his sarcasm stumbles upon Varsha Bollamma who is very active and is willing to achieve something big in life. Both start a live-in relationship, but differences arise between them. How did they reunite again and what did happen during the process needs to be witnessed in the main movie. Santo’s witty one-liners, the chemistry between the lead pair are perfect.

Venella Kishore, Devi Prasad and Madhurima are the other prominent cast of the film. Produced jointly by Nandkumar Abbineni and Bharath Maguluri under Dream Town Productions and HighFive Pictures banners, the movie will hit screens on March 18, 2022. Sweekar Agasthi had composed the music for this movie.