Kangana Ranaut is one of the most controversial actresses in the Indian film industry. She often passes one or the other statements which keeps her in the headlines. There is no denying the fact that she is a profound artist. Her first look poster from the film Emergency shook one and all.

Now the news is that the actress has been diagnosed with dengue. Despite her bad health the actress continued to shoot for the film. Kangana’s team wrote she is an inspiration. They called it madness and not passion as she decided to work under such extreme conditions. Kangana replied by writing “Body gets ill, not the spirit.”

Emergency also has Anupam Kher, Shreyas Talpade, Bhumika Chawla, and others in key roles. Renu Pitti and Kangana Ranaut are producing this movie under the Manikarnika Films banner. Kangana herself is directing the film. The movie will be released in theaters in 2023. 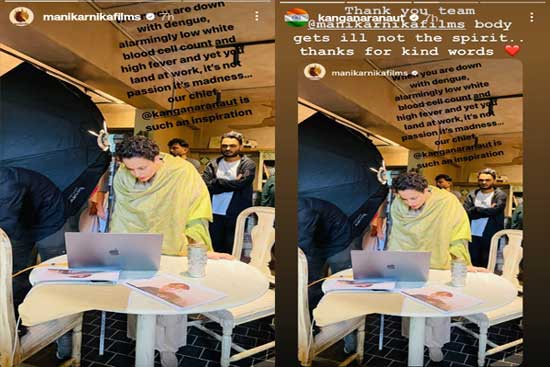