Star director to grace the pre-release event of Aadavaallu Meeku Johaarlu
Published on Feb 25, 2022 11:05 am IST 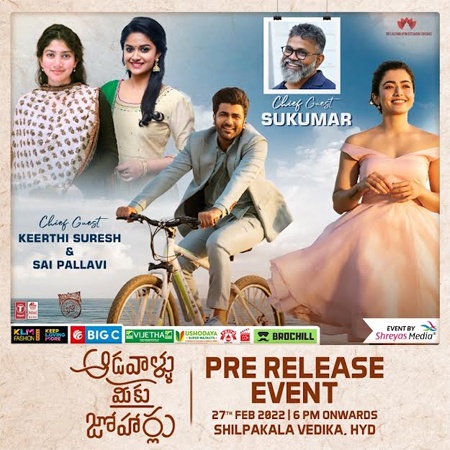 Aadavaalu Meeku Johaarlu starring Sharwanand and Rashmika Mandanna is slated for a grand release in theaters on March 4, 2022. Directed by Tirumala Kishore, the family entertainer’s theatrical trailer will be launched by the star heroines – Keerthy Suresh and Sai Pallavi.

Now, the makers have also confirmed that the trailer will be unveiled at the grand pre-release event scheduled to happen on February 27, 2022, at Shilpakala Vedika in Hyderabad. Genius director, Sukumar will grace the event as the chief guest.

The movie also has the veteran actresses Radhika Sarathkumar, Khushbu Sundar and Urvashi in pivotal roles. Produced by Sudhakar Cherukuri under the SLV Cinemas banner, the movie has the music of Rock Star, Devi Sri Prasad.