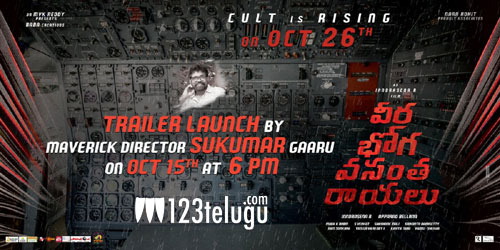 The makers of the upcoming multi-starrer action drama, Veera Bhoga Vasantha Rayalu, are all set to unveil the film’s theatrical trailer today (Oct 15). Star director Sukumar will be launching the trailer at 6 pm this evening.

VBVR features Nara Rohith, Sudheer Babu, Sree Vishnu and Shriya in lead roles. The film will be hitting theaters on October 26. Interestingly, in a first ever feat, the film will be premiered in the US on October 23, two days ahead of its theatrical release in the twin Telugu states.
VBVR is produced by Apparao Bellana and debutant Indrasena R has directed it. Mark K Robin is the music composer.