Star hero, director to be chief guests at Thaman’s Ala Amerikapurramuloo
Published on Sep 12, 2021 3:50 pm IST 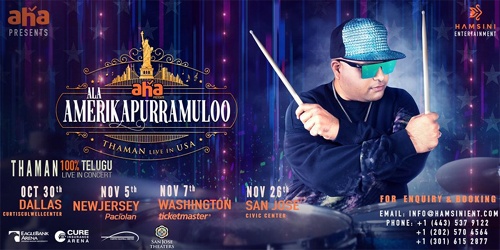 Music composer Thaman has been in solid form for the last few years and has been constantly churning out chartbusters. He currently has his hands full with several prestigious projects featuring top stars and directors.

Thaman will be performing live at Ala Amerikapurramuloo musical concert in several major cities across America. Leading event management company Hamsini Entertainment will be organizing the show in a grand manner. Even though the tour was originally scheduled to take place during August-September, it has now been postponed to the upcoming Diwali festival in October due to unavoidable events.

Ala Amerikapurramuloo will be held in Dallas, TX on October 30, New Jersey on November 5, Washington DC on November 7 and San Jose, CA on November 26. Apparently, a star director and hero will be gracing the show’s Diwali night as the chief guests.