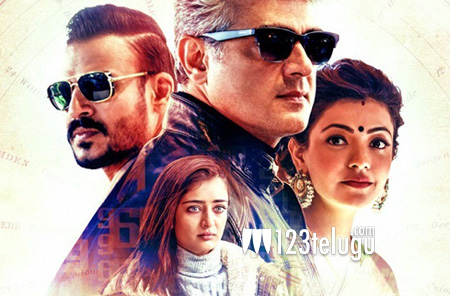 Ajith’s upcoming Tamil flick, Vivegam is all set for a grand release on August 24th. The film will be out on the same day here in Telugu as Vivekam. As Ajith is a massive crowd puller in Tamil Nadu, his films don’t need any special promotion.

But the scenario is not the same here in Telugu states as Ajith is known only in the A centers. Also, the distribution rights have been sold for a whopping 5.5 crores which are a huge for an Ajith film.

On the other hand, the unit has completely neglected the promotions in Telugu and a result of this, the advance booking has also opened on a dull note. Vivekam will also face tough competition from other two releases Arjun Reddy and Dhanush’s VIP2 which are also arriving this weekend.

By overcoming all these hurdles, will Vivekam sustain at the box office?. Well, we need to wait for some more time to find out.