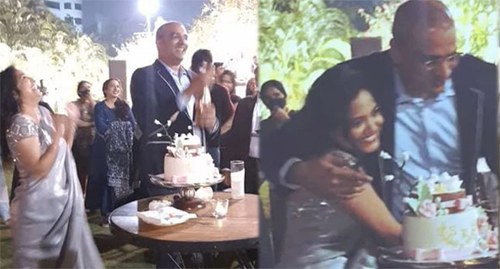 Singer Sunitha and her beau Ram Veerapaneni are all set to tie the knot with each other in January next year. The couple got engaged in a private ceremony a few days ago. And a few pictures from the couple’s pre-wedding celebrations are going viral on social media.

Interestingly, it’s being rumored that it was star hero Nithiin who arranged the pre-wedding bash for the soon-to-be couple. Apparently, Nithiin is close to Ram and he threw the party at a star hotel in Gachibowli. Popular celebrities like Renu Desai, Suma Kanakala and several others attended the party and congratulated the couple.