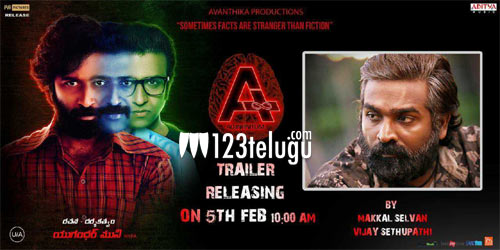 The makers of the upcoming thriller, A, have promoted the film quite well in the last few days. The film is in its post-production mode and will be out on the 26th of February.

The latest update is that the film’s trailer will be released by none other than Makkal Selvan Vijay Setupathi on the 5th of this month in a special way. The film has come out quite well is the talk as of now.

‘A’ features young actors Nithin Prasanna and Preethi Asrani as the main leads. Touted as a unique concept-oriented thriller, the film has been directed by debutant Yugandhar Muni and produced by Geetha Minsala under the Avanthika Productions banner.