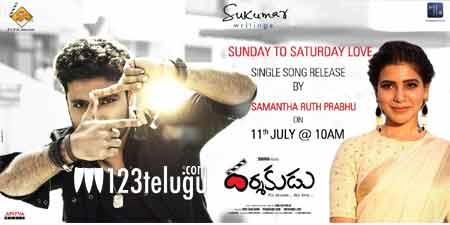 Director Sukumar roped in his Nannaku Prematho actress Rakul Preet to release the first single of his upcoming production, Darshakudu, a week ago. Now, he has entrusted Rangasthalam heroine Samantha with the job of unveiling the film’s second single.

Samantha will release the “Sunday to Saturday love” song tomorrow at 10 am. In the past, Sukumar had NTR release Darshakudu’s teaser, thus creating a huge buzz for this small film. Darshakudu stars debutant Ashok Bandreddi and Telugu girls Eesha Rebba and Pujita Ponnada. Jakka Hari Prasad is making his directorial debut with this film.