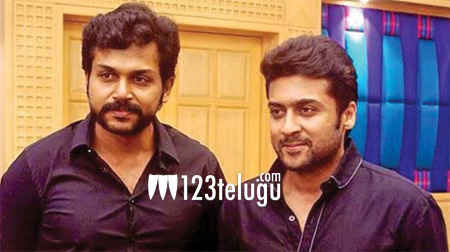 Suriya and his younger brother Karthi are two of the busiest actors in Tamil cinema. And it’s quite rare that they find time to go on long vacations at the same time. No wonder, fans of both the actors were surprised to see that both of them took time off their busy schedules to go on a foreign trip.

Suriya was accompanied by Jyothika, whereas Karthi’s wife Ranjini joined the two brothers for a trip to Norway. The four are said to have gone on a trek and indulged themselves with local cuisine.

Meanwhile, Karthi is all set to begin promoting his forthcoming action drama, Khaake, and on the other hand, Suriya’s upcoming film Thaana Serndha Koottam is gearing up for release for Sankranthi.