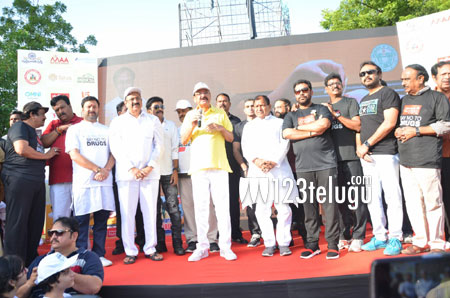 A couple of weeks ago, several Tollywood stars were served notices by the Telangana Excise Department in connection with the drug scandal that shook everyone in the film fraternity. In order to raise awareness and end the drug menace in the society, the Movie Artiste’s Association (MAA) organized a grand anti-drug walk.

The anti-drug walk was held at the KBR Park in Hyderabad this morning. Senior film stars like Naresh, Sivaji Raja, Rajasekhar and family, Ravi Varma and a few others took part in the event, apart from the Excise Department Director Akun Sabharwal, Vice President candidate M Venkaiah Naidu and several politicians.

But unfortunately, none of the prominent stars made it to the event despite today being a Sunday, and it dampened the spirit of the event to an extent.