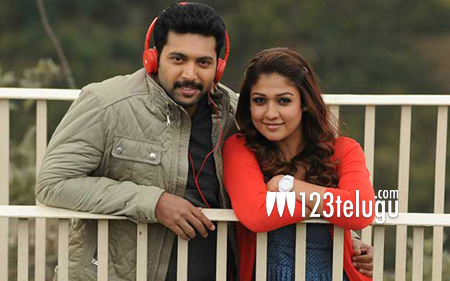 Thani Oruvan is a Tamil action thriller which released on August 28th. Starring Jayam Ravi and Nayantara in the lead roles, the movie is registering phenomenal collections at the box office. Mohan Raja is the director and popular South Indian actor Aravind Swamy played a crucial in the film.

As of now, ace Tollywood producers Dil Raju and DVV Danayya are competing for the remake rights of this film. It is heard that DVV Danayya joined hands with senior producer NV Prasad and offered 9 Crores for the Telugu rights of the film. On the other hand, Dil Raju is also slugging it out with them to acquire the remake rights. It is learnt that Mohan Raja is keen to direct the Telugu version as well.

In the meantime, both Mahesh Babu and Ram Charan are impressed with the movie and are ready to act in the Telugu version. So, it is believed that Charan will play the lead role if Danayya bags the rights and Mahesh Babu will star in the remake if Dil Raju acquires them. An official confirmation will be out very soon.