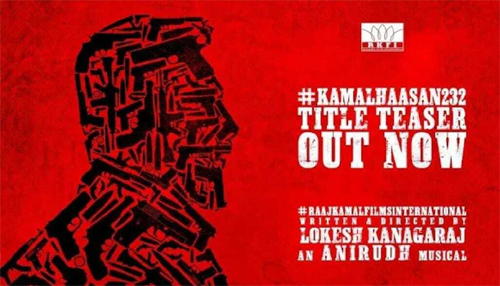 On the occasion of legendary actor-filmmaker Kamal Haasan’s 66th birthday, the title of his most eagerly awaited 232nd film has been made official through a stunningly made teaser The film has been titled Vikram. Khaidi and Master fame Lokesh Kanagaraj will be directing this crazy project.

The title teaser leaves enough ambiguity, as it hints that Kamal could be a psychopath or a man who’s on massive mission. The teaser promises stylish action and unlimited thrills in the movie. The soundtrack scored by Anirudh Ravichander is trippy and adds to the thrill factor. Yet another interesting aspect is that Kamal had earlier acted in a film titled Vikram in 1986.

Vikram is touted as a dark action thriller. The regular shooting will commence in December and the entire shooting will be wrapped up by early summer next year. Kamal Haasan’s Raaj Kamal International banner is bankrolling this exciting project.