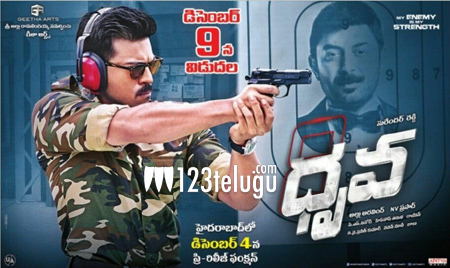 It is known that the makérs of Dhruva have decided to hold the pre-release event of this movie on December 4th.

Initially, the unit planned to hold this event in temple town of Tirupathi but due to unknown reason, they have decided to organize this mega event here in Hyderabad.

Meanwhile, the theatrical trailer which was out a few days back is creating records on social media. Directed by Surender Reddy, this film has Rakul Preet as the female lead.

Allu Arvind produces this mega movie which is scheduled for a worldwide release on December 9th.