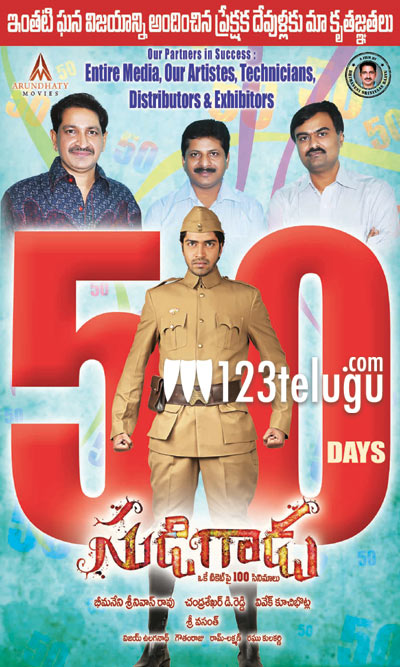 Remember Allari Naresh as the Sudden Star in the movie ‘Sudigadu’? The film was a highly anticipatedcomedy featuring Allari Naresh in a hilarious role and it has just completed its 50 day run today. The movie turned out to be the biggest hit in Allari Naresh’s career and brought good money to all those who were involved with it. It was well received even internationally.

The movie’s director Bhimaneni Srinivasa Rao expressed happiness over the success. “In the old days a movie’s success was decided upon the number of days it lasted at the theatres. Now, the meaning of that success has changed from how long it stays to how much it collects at the box office. In this scenario, we are happy that ‘Sudigadu’ has successfully reached 50 days”, he said.

The movie was produced by Chandrasekhar Reddy and Monal Gajjar was seen as the heroine. Sri Vasanth scored the music. Allari Naresh must surely be congratulated for his ‘Sudi’.