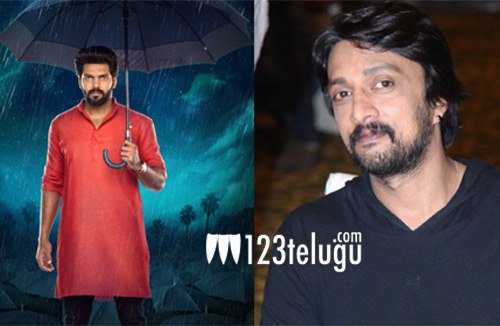 For the last couple of months, the makers of Rajaratham, the soon-to-release Kannada-Telugu bilingual, have been creating a lot of buzz for the movie with non-stop promotions. The film stars Anup Bhandari and Avanthika Shetty as the main leads. Rana Daggubati has given a voiceover, while Tamil star Arya plays a crucial role in the movie.

The first look of Arya’s Vishwa character in Rajaratham had created quite a stir. Apparently, Arya’s look was inspired by Eega and Baahubali actor Kiccha Sudeep. Sudeep had earlier worked in Anup and Nirup’s father Sudhakar Bhandari’s Kannada teleserial, Premada Kadambari, in the 90s.

Anup was working on the initial draft of Rajaratham way back in 2010. During that time, Sudeep was the chief guest at the press meet of Anup’s award-winning short film, Words. Sudeep’s attire for the event – a blue kurta, jeans and sandals, immediately struck a chord with Anup. It was exactly what he wanted Arya’s Vishwa character in Rajaratham to look like.

When Rajaratham’s pre-production began, he discussed the look with his wife Neetha Shetty, who’s also the costume designer for Rajaratham, and together, they came up with a dashing look for Arya.

Rajaratham is a musical romantic comedy. The film is being released worldwide on March 23rd by Jollyhits. Ajay Reddy, Anju Vallabhaneni, Vishu Dakappagari and Sathish Sastry are the producers of this movie.