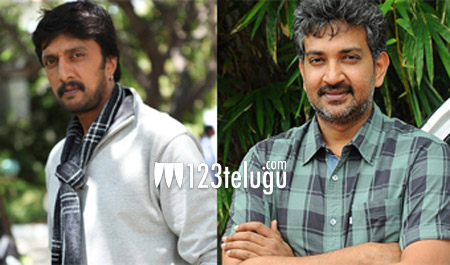 Kiccha Sudeep shot to limelight with Rajamouli’s Eega. His acting skills in the movie were highly applauded by one and all. Even though he was a huge star in Karnataka, people in south started recognizing him as a celebrity after this movie.

Recently he has remade the super hit film Mirchi in Kannada, and this movie is setting the box offices on fire. Sudeep himself has directed the movie. The actor resorted to twitter and thanked rajamouli for the opportunity.

“Special tnxx to ssrajamouli sir for these magical moments in my life n to all the film makers in my life fr makin it possibl.. Luv u all” tweeted Sudeep.

Reports also have come in that the actor is planning to remake Attarintiki Daaredi in Kannada.