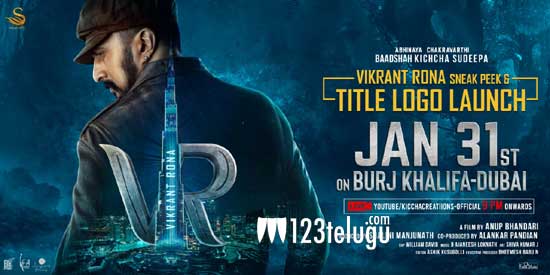 Sandalwood star Sudeep’s ongoing action thriller, Vikrant Rona, is one of the most eagerly awaited movies in 2021. A major portion of the film’s shooting was wrapped up in Hyderabad. The terrific intro teaser and Sudeep’s striking look as Vikrant Rona were released last year and they took fans’ expectations to the next level.

Now, Vikrant Rona is all set to create a unique world record. The film’s title logo and a 3 minute long sneak peek will be released on the iconic Dubai tourist attraction, Burj Khalifa, on January 31st. Vikrant Rona is the first film in the world to pull off this feat.

Vikrant Rona is being directed by noted Sandalwood filmmaker Anup Bhandari and bankrolled by Manjunath Gowda. Shraddha Srinath is the film’s leading lady.