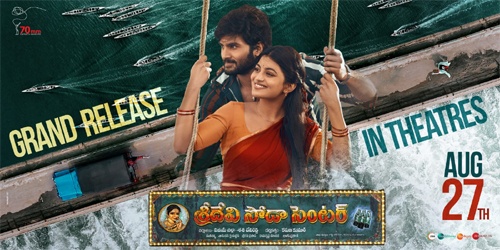 With big ticket films featuring top stars still not ready to hit theaters post lockdown, several small and medium budget movies have been entertaining movie lovers in cinemas for the last couple of weeks. Up next for a big theatrical release is Sudheer Babu and Anandhi’s much-awaited rural action entertainer, Sridevi Soda Center.

Sridevi Soda Center’s team today announced that the film will have a wide release on the 27th of August. The makers further guaranteed all the fans of ‘100% Resound’ in cinemas. SSC is directed by Palasa 1978 fame Karuna Kumar and produced by Vijay Chilla and Shashi Devireddy under 70mm Entertainments banner. Manisharma has composed the music.