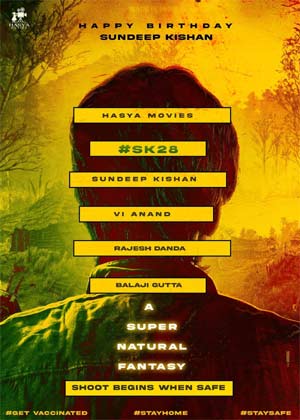 Hero Sundeep Kishan has joined hands with his good friends VI Anand and producer Rajesh Danda for his 28th film. This as-yet-untitled film has had its formal announcement just a while ago on the occasion of Sundeep’s birthday.

The announcement poster is quite intriguing as Sundeep gazes into a mysterious, isolated location. Touted as a supernatural fantasy thriller, the film will showcase Sundeep in a never before seen role. Rajesh Danda is producing the film under Hasya Movies banner, while Balaji Gutta is the co-producer.

The film’s shoot will begin once the situation returns to normalcy. The rest of the film’s cast and crew will be announced later.