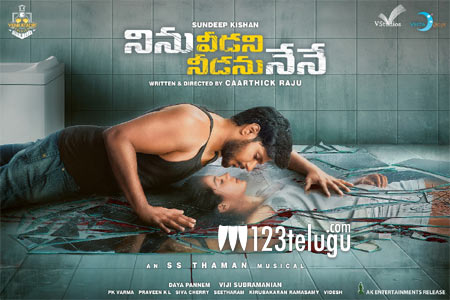 Sundeep Kishan is producing his new movie Ninu Veedani Needanu Nene on Venkatadri Talkies banner in association with Vista Dream Merchants. Directed by Caarthick Raaju, the actor is paired up with Anya Singh in this entertainer.

Speaking about the film, director Caarthick Raaju said “We are dealing with a new point in the movie. The last schedule is being shot in Hyderabad and an important action sequence is also part of the schedule of this film which tells a supernatural story.

Producers Daya Pannem and VG Subrahmanyan are happy that the production works have been going on as per schedule. The film is being made simultaneously in Telugu and Tamil.

AK Entertainments’ Anil Sunkara will release it in the month of February. Posani Krishna Murali, Murali Sharma, Vennela Kishore, Rahul Ramakrishna, Poornima Bhagyaraj and Pragathi are part of the cast. Music is by SS Thaman.