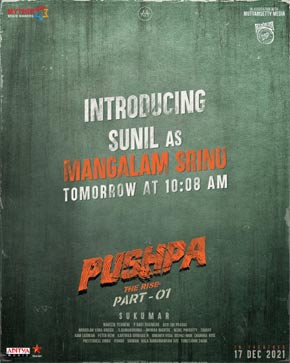 Pushpa is a film that many are waiting for as it has Allu Arjun in a lead role. Not many know but noted hero, Sunil is playing a negative lead in the film.

In fact, he will be a major attraction in the first part of Pushpa. The news is that Sunil’s badass look will be released tomorrow.

Fahadh Faasil plays the main villain in this film and we need to see how Sukumar will showcase Sunil in this film. The wait for his look gets interesting.